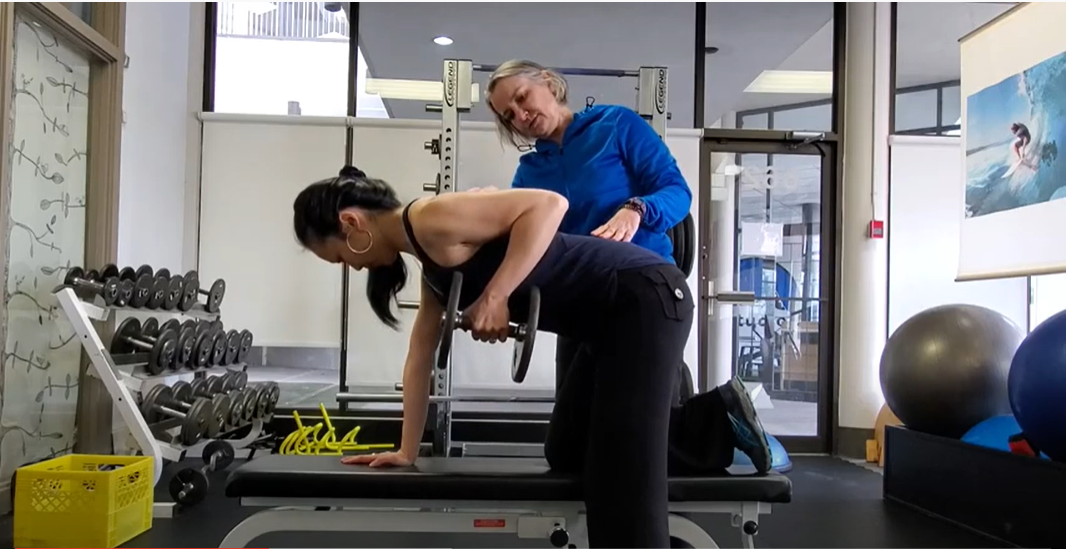 In this video, one of our personal trainers, Gillian, shows Vancouverites how to do a single bent over row. This is a popular exercise but one that people keep doing incorrectly. We will show you how to do it so you work the right muscles.

Gillian: All right. Now, you have to be careful with your hypermobility there (at the elbow). You want to make sure that the muscles are actually working with that position there. You’re going to push into the bench so we get a little bit more width here (across scapula and upper back). A little bit more cross the shoulders here. And then you are going to pick up the weight and keep it close.

How’s that feel that way? That good? All right. So engaging your deep core muscle to make sure that you are using your legs and your core muscles to stabilize this, pushing down into that bench.

One thing we don’t want to do is with that arm holding the weight, you’re going to make sure you’re not pulling it in towards you. That’s something else we’re just focusing on the shoulder joint, not on the elbow. What’s going on there? So you inhale that down, keep pushing it and exhale, inhale and exhale.

I know it may seem like a very simple motion, but there are a lot of joints involved to stabilize here. One more time. Good. Now bring that weight onto the bench. Okay. If you have a heavyweight, you really do not want to be putting away down onto the floor, maybe roll with it.

Nicole: If you have the control to be able to lower appropriately, you’re probably not watching this video.  We’re just looking at just staying safe.

Gillian: Obviously you don’t want it rolling around on you either.

Nicole: So, yeah, we’ll put it down and then just keep an eye on it. That’s one of the things that we see with this, this elbow joint. There’s an incredible amount of mobility there. And a lot of people kind of see that it probably doesn’t look normal to you, but when you’re doing it, it feels normal. It feels really solid. We just kind of sit on that.

The other thing, when you’ve got some muscular actions through here and you’re wearing your core when people complain that their wrist hurts, it is because they’re sitting on it too much.

Because you bounce around on it. That’s probably what’s going on is because you’re actually leaning right into it. And from here, I can actually see my fingers going white, staying in that position. So use the core, back off, use the muscles, and then you can row for days.

Gillian: Maybe not for days. The other thing is when you’re focusing on that one arm that’s rowing, you may bring your focus away from your other side. And that’s where you start to get that sort of winging and tipping going on, where your shoulder, your trunk may go down and your shoulder is going to end up well through a little bit there.

So you do want to be mindful of, yes, the elbow is extended and the shoulder is flat against your torso.

Nicole:  Another feeling or sensation is that you have broad shoulders, right? You’re open through the chest, even though you’re down, you’re still open versus collapsed up into that movement.

Yeah, I think those are probably the main points. Yes. We talked a little bit about having that core neutral and Gillian is able to spot me, but make sure that your back is in that neutral position. Sometimes, people, they can stand up and be upright, but the minute you bring it down, sometimes these things start to happen.

Nicole: Because you’re so focused on what you’re lifting when you don’t notice that you’ve got a flat back or, or sometimes they’re really just trying to get good posture, but then it’s an exaggerated one, where the ribcage has popped out. I want to just tuck that sucker in, keep them nice and long.

And the last one that I think you mentioned briefly is in that pulling action. Some people end up doing something like a bicep curl. They bring the dumbbell up to the shoulder because they go, ‘Oh, okay.’ They can bring the arm up versus…

Gillian: The arm gets really tired.

Nicole: Yes! Versus bringing it back, or even aiming the hands for the rib cage. I think that was that’s main pointers for one-arm row. Thanks.