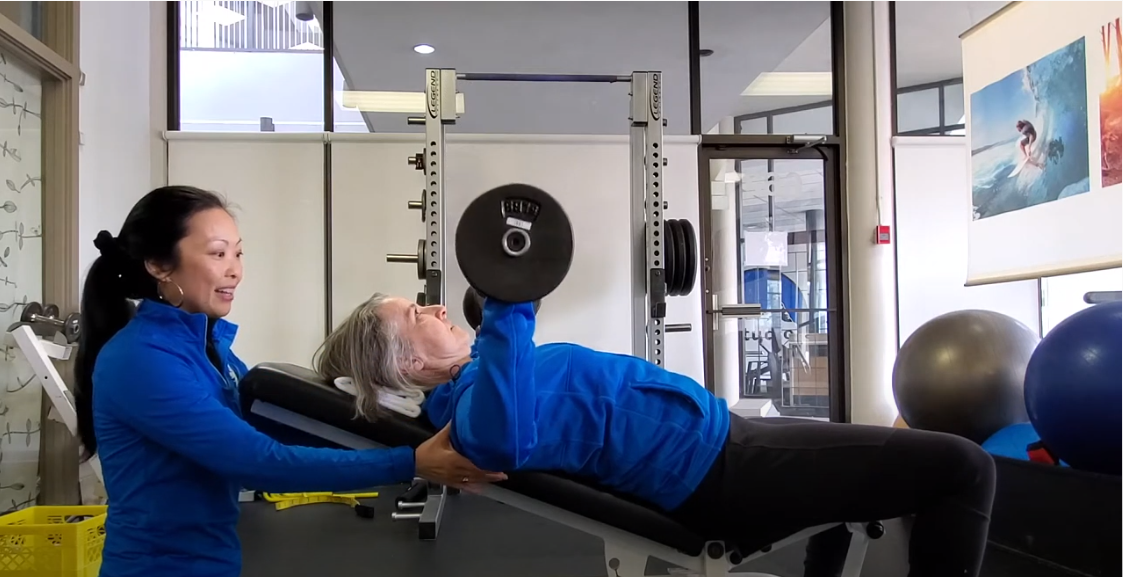 How To Do An Incline Bench Press

The inclined bench press has been a popular exercise for Vancouverites and in this video, Le Physique’s personal trainers show you how to do the exercise correctly.

Nicole: We are doing an incline bench. What we’re looking for, is basically the bench is on an incline. I don’t know what else I can say about that! I know some people say, 45 degrees or 35 degrees but it doesn’t really matter. You’ve got your flat bench, which is more general, all pecs. When you start to incline it, it just hits different fibres.

More like, the upper chest is kind of the goal here. You’re going to find a position that works for you. That’s just much more comfortable. So find *that* to start off with, and there’s no right or wrong with this one. Gillian is going to come on back, get nice and relaxed there. Perfect. So from a spotting position, I’m just going to be behind where I can spot her elbows and her wrists.

When you’re ready, we’re going to go ahead and bring those (dumbbells) down, then up and towards the ceiling. She’s going to rotate it, as though she’s holding along like a stick or a barbell. When you’re ready, you can bring those elbows down and apart inhale and then exhale up together. So that is the action.

I’m breaking it down into parts. It could be technical, like abduct. You’ll notice that some people are clinking the dumbbells. If you find that you’ve done that that’s not a big deal. Gyms are sometimes they frowned on it. Like if you’re new and you find you’re just trying to get them close and they click.

Gillian: You want to get your hands closer, you can rotate at the top.

Nicole: We’ve got an option there. I like to keep it as a clean movement because it separates it from a Pec fly, which we’ll talk about in another video. But again, there’s no right or wrong. If you find rotating, it just feels right, it feels natural. That’s totally fine. Gillian’s abs are still engaged even though she’s in a supine supported position.

If your back feels better than I’d say, that’s the position you want to be in. I’ll just do one or two more here. We’re working with the pectoralis major, triceps, anterior deltoids, she’s breathing. And then when she’s finished, she’s going to bring the dumbbells down to the rib cage versus trying to just drop them down to the floor. It is going to be really hard on the shoulder joint.

Gillian: And some people do that go up.

Nicole: Yeah. So we’re keeping it close to the midline. Her rib cage can support it because she still has tension in her arms. They’re not just sitting on her and when she’s finished, you’re just going to add in a little bit and then just roll the feet forward and the torso comes with it. There we go. And that’s your bench press.

So just a few pointers, what about that wrist positioning? So here have, knuckles to the ceiling.

Gillian: Yeah. So you want to keep your knuckles pointed up right? You’re going to try to keep as much length in the wrist as you can. Yes, it is sitting in the heel of the hand, but you don’t want it to be bending back.

You’ll notice that as you bend back, you even lose your grip. You want to keep it in that position where you have a better grip.

Nicole: It actually helps with your grip strength as well. And it’s just easier. It’s one less thing to worry about. You also don’t need a death grip on the dumbbell.

I find sometimes people when they’re doing it like I noticed their knuckles start to turn white. If you’re new, you’ve got this thing over your face, you don’t want to drop it. But once you realize how strong you are, you’re like, ‘Oh, Hey, I can do this.’ Then you can start to loosen up the grip. And like Gillian says, it’s in the heel of the hand. Not in the fingers. Anything else?

Gillian: Yeah. Be aware of the weight you’re using. You can work a lot before you start really piling on the weight because if you find yourself pulling your arms up to the ceiling.

Nicole: Alright! So that is the inclined bench press.